Four drawers are sit around a long table and they create rhythmic patterns on the improvisation of the electric piano writing with pens, pencil and felt-tips on an amplified table. In this way they create cute extemporary songs, visual-sonic creations improvised on the corner of sketchbooks,
as tiny melodic pictures sketched in the air.
The table is open to the audience who can join it drawing/playing as child.
The project started as a duo (Fabio Bonelli with pencils, Antonello Raggi at electric piano) for the electronic Festival Audiovisiva 2008 (Milano),
and in 2010 became a group of rhythmic drawers playing several times in Italy such as at Milano Piano City (Milano, 2012), MITO Fringe (Milano, 2011), Soul food (Roma, 2011). In 2012 MATITA cooperated with the south african poet Tanya Van Shalkwyk for the poetry festival Poesia Presente (Monza).
The group:
Antonello Raggi – electric piano, Fabio Bonelli – pens, Luigi Bonelli – pencils, Susanna Tosatti – continuos drawings, Fabio Valesini – felt-tips
booking : Buji     www.buji.it 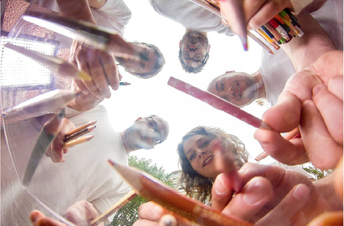 Nino Errera and Robert Lippok met for the first time in 2012 to work on Ludovico Einaudi’s The Elements concert. The project was a tribute to Einaudi’s mentor, Luciano Berio and premiered at Auditorium Parco della Musica in Rome. In 2014 they developed the project The Persistence of Memory for the Ethnological Museum in Berlin Dahlem using instruments, such as Gamelan and Indian chimes, of the collection.
During a residency in Chocó / Pacific Coast, Colombia in 2015 Robert Lippok investigated the near by rainforest. He collected several objects like branches and leaves as sources for compositions. Later in the year Errera and Lippok produced the music for the video installation Atrato by the Colombian Artist Fernando Aries in collaboration with SINFONÍA TRÓPICO an initiative that raises awareness about the loss of biodiversity and the risks of deforestation and climate change. Since than Errera and Lippok where more interested in those topics.
Using they unique way of combining percussion and electronics, Seeds they latest project, goes deeper into the field of nature, rhythm and harmonies exploring the complex relationships between nature and sound. 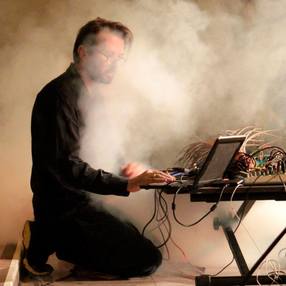 d’BEETH is a dj-set of classic music on vinyl records
Fashinated by the charm of old classical music vinyls, something which was very precious several years ago and now is cheap and poor, Fabio Bonelli with d’BEETH takes the imaginary of that objects, its sounds, its imperfection, its old moistured cover.
Years of rummaging through stalls and second-hand record shops have produced a collection of precious gems ranging from the Renaissance to the early 20th century, with a penchant for baroque and uncommon instruments. Fragments of harp works, flute quartets, ensemble of brass and drums, but also the classic violin, cello and piano. A slightly retro-flavoured project but with a touch of refinement and ancient charm, contaminated by the use of turntables and mixers… One of a kind.
He played in Berlin and in several Festival of experimental music (Muviments – Itri (LT), Acusmatiq – Ancona, Danae Festival – Milano). 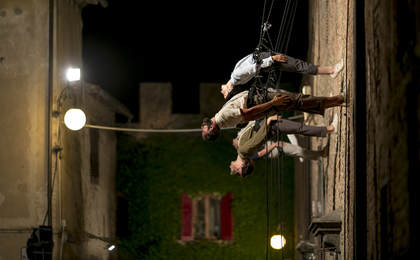 Andrea Vizzini and PianoLink presents the Silent Wifi Concert ©: more than a concert,
an evocative multisensory experience in which the viewer is completely immersed in an active and new way,
a concert performed in the silence of the night, audible in the headphones each in its auditor microcosm
through high-fidelity wifi headphones, to listen to a program inspired by the night, to be carried along wandering enveloped
​by dreamlike visions.
Music, art and literature on the same stage to show how the night and its suggestions have moved the feelings of artists of all time ... 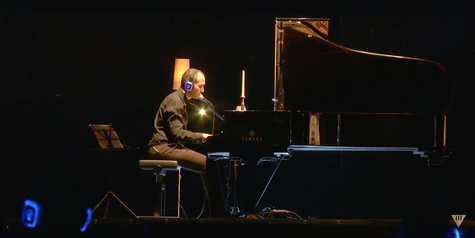 To get into Jozef Van Wissem's world is to surrender to the inevitability - and timelessness - of a strange  music created at its own pace, in a manner wholly of its creator's making. He sets the listener into a private world, looking out through a glass darkly, such is the intense quality of the music. Brevity, simplicity, directness is the key. (Quietus) Van Wissem is ‘both an avant-garde composer and a baroque lutenist, and thus no stranger to dichotomy,’ (New York Times). He has been ‘pushing the lute’s agenda out of the academy and into more accessible circles’ (Pitchfork). ‘ He's performed over 800 solo lute concerts in churches and at concert venues around the world, including prestigious rock festivals like ATP
​and Primavera Sound, playing his all black, one-of-a-kind baroque lute custom build for him. In 2013 van Wissem won the Cannes Soundtrack Award for best score at the Cannes Film Festival for  "Only Lovers Left Alive". Van Wissem has played live and recorded with Jim Jarmusch, Tilda Swinton and Zola Jesus.  On ‘ When Shall This Bright Day Begin”  the baroque sharp-tuned dances he weaves under His vocal line possess an “occult delicate beauty” (Mojo). In 2017 Van Wissem self -released  a live record entitled" New Lute Music For Film" ( Incunabulum). Van Wissem was commissioned to compose a sound piece for Hans Holbein’s painting ‘The Ambassadors”  (1533) by the National Gallery. In  December 2017 he was commissioned by the Hermitage museum to perform the piece depicted in Caravaggio’s painting ‘the Lute Player ‘(1596). Likewise, his latest release “Nobody living can ever make me turn back” was composed with the contemporary  “Vanitas” painting depicted on the cover in mind.

The Lost ABC is a duo recently founded and based in Milan, Italy. Gianluca Mancini, piano and synthesizers, and Massimiliano Fraticelli, guitars and live electronics. The Album takes inspiration from the huge passion that both the musicians have for the world of the soundtracks and its main composers. The goal of this project was to recreate a sort of imaginary soundtrack capable to unify the different styles of this art in a unique and harmonious tread, using the magnificent and powerful warmness of the Grand Piano Steinway and combining it with the wide variety of the tones of guitars. The album faithfully reflects the atmosphere and the melancholy suggestions of the soundtracks written for the current and major directors as Inarritu, Villeneuve, Soderbergh or Fincher and the musicians have tried to compose it as if they were in front of them, a fancy dialogue , a sort of musical simposio. The result is an orchestral depiction with a minimalistic approach, a musical vessel drenched with strings, ambient noise, pure piano melody and guitar scratches. Most of the tracks of the album were recorded around the world, capturing violin’s theme in Hotel’s room, or improvising recording set in the theaters, putting microphones around fabulous Grand piano found on tour: the main theme of one of the tracks was recorded on a Steinway piano built in the 30s, wonderfully preserved in the house of one of the main italian publisher. It’s been an interesting and experimental approach, result of the experiences of Mancini as musical producer and Fraticelli as sound engineer in field recordings. 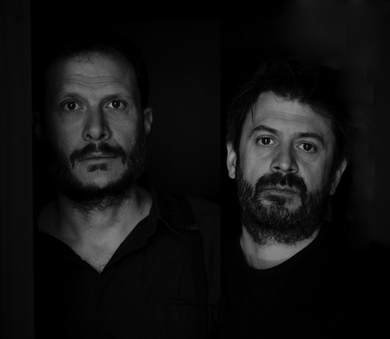